It’s been a busy couple of weeks here at HQ, consisting mostly of me troubleshooting my Gen7 1.2 board in the forums and on IRC. You can read of my ordeals under the title “Getting movement with Teacup + Gen7 1.2” and my aborted attempts at troubleshooting the (probably dead) Pololus is here: How to check if A4988 is fried?

Finally, Traumflug offered to take a look at the board if I could send it to Germany. I dropped it in a mailbox quicker than you can say “Spitze!” and worried my head about getting a multimeter which wouldn’t give me random readings instead. A couple of days later I got an email back which opened with:

Your board arrived today. It took me something like a minute to find the bridge … :-) See the attached picture.

Which at once had me feeling happy that it’s solved, and rather dull for not having spottet the short. I actually got a small microscope and went over the board to find shorts, but I ignored the areas easily visible by the naked eye… Since I have very little dignity left to salvage I’m taking this in stride and the board is on it’s way to Turku, where I’ll assembly the 3D printer. Shouldn’t take more than a day or so, right? What could go wrong? 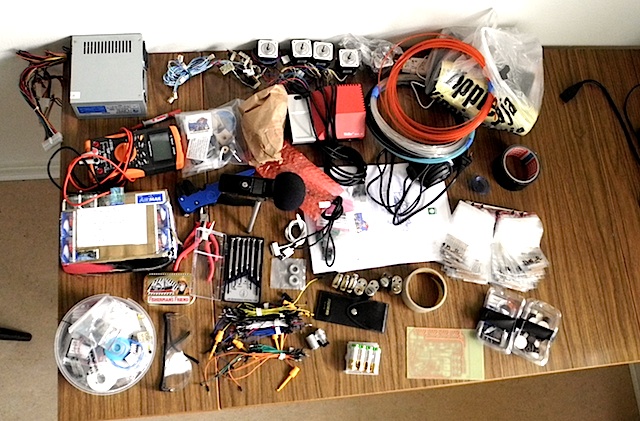 Speaking of being on it’s way to Turku: I’m writing this at Landvetter airport — amongst screaming children and the smell of fear which is probably I — and my plane leaves in a while. I’m drinking expensive beer and hoping that my luggage is under the weight limit. Seeing as this is my first residency, I’m looking forwards to having a change of scenery and a deadline for the project. Although these open-ended processess are all good and fun, actually setting print to paper — or plastic to Turku, as it were — will feel nice.

As for the multimeter, at first I got the Fluke 115 — all the reviews list Fluke as the doubleplusbest — but switched to an Agilent U1242B after watching the one hour “multimeter buying guide” with David Jones over at the EEV blog (it gets better once you get used to his voice. Your ears take five six hours to adapt, in my experience). The deciding factor was that the Agilent had μA while the Fluke only did mA — I’m not good enough at these things to know when I’ll be using what, but will take others word for it. Also, the Agilent can use temperature probes which might be handy if I’m calibrating the Makergear hotend or the heated bed.

Ok, enough with this light banter. Off I go.