Besides dreaming about taking a boat into the great unknown, another popular escapist fantasy is gardening. Back to the hoe and the illusion of self-sufficiency. Annas brother Andy has gone nuts with the two plots he’s running and generously shares his veggies and thoughts on gardening. Apparently planting in “mixed squares” is what the cool kids are doing these days.

So we’re sitting in a bar, me, Olle and a couple of his friends, when someone starts talking about how there’s this one gardening collective nearby that gives out new plots to people based on who’s there earliest on a particular day. Because we’re drinking beer it seems like an awesome idea to show up on that day and sign up. There’s talk of bringing a tent and camping outside to ensure a good place, and the more beer we have the more enthusiastic we are about the enterprise. We’re gonna grow carrots and beans and flowers and that salad thingy whaddaya callit, oh yeah “chard,” chard is awesome, gotta grow it hey who’s more beer want?

I had already beed offered to share a plot with Anna and Andy a while back, so I can’t really put the finger on why I thought this was a good – or new – idea. Maybe it’s nest building; I own a bed and a laptop, and have nothing but student loans and library cards in my own name. I have no material sense of belonging, so perhaps a 7×7 metre plot of land holds an allure of homesteading? (Technically it wouldn’t be my plot since I’d be sharing it with Olle, but it would be my name on the deed.)

Or maybe it’s the peripheral stuff that appeals to me. Unlike other projects I’ve been enthusiastic about, this one happens to involve someone else which gave it enough momentum to be carried through. The project would in that case obviously be “queue early in the morning” and not “gardening.” Anyway. 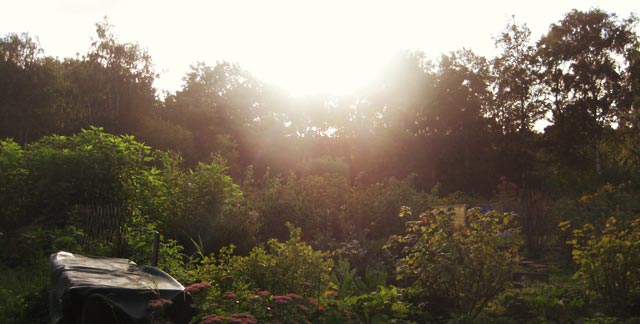 Like many ideas that are spawned while merry, this one was blissfully forgotten until I happened upon Sara and she reminded me. It turned out that the signup occasion was just around the corner, so me and Olle decided to spend Friday sober and stand in line before eight on Saturday morning. Waking up early is always painful unless there’s someone with a cup of coffee or a my dick in hand, but I drag myself into a pair of shoes and onto a bike. Olle was standing with a very manly scarf by Röda Sten, scanning the river and trying to come up with a clever remark on my tardiness.

Instead of looking at a map and learning the proper road to get there, we lock our bikes and take the same goat path that Olle had walked on the evening when we first spawned the idea. “Not the fastest way but we’ll get there” is the sentiment which has us struggling up a mountain. We’re walking up the the crags by Röda Sten – where the dub party took place a while back – and at half seven in the morning it makes for unsteady and whining progress.

A small trail leads us through the patch of wood and we emerge onto a parking lot next to a community garden. It’s not the one we’re heading for, but just around the corner there’s another garden and we can see people milling about. Unless they’re the gardening undead, they’re there for the same purpose as we. Someone has posted a bill with numbers, and we pull our tab. It’s not even eight o’clock and there’s already 14 numbers gone before ours; Some have been there half the night and the mood is subdued albeit cheerful.

We settle in, wait for the sun and drink coffee from a thermos. Had me and Olle been gay it would have been romantic; Others are sitting on benches or walking through the different gardens and it’s indeed very pretty. 120 small plots of land are being cultivated in as many ways; From a distance I can only recognise the sunflowers.

One of the guys who’d originally informed us about this event shows up. He’d been there at six, but took off once he had his number secured. He showed us around and I get to eat raw borlotti beans. Someone shows up with a portable beehive and is describing its function to some kids who are delighted and frightened. More and more people come and before you know it it’s ten o’clock and we’re signing our names on a list.

That’s it. There’s no certainty that we’ll get the plot, but I and Olle are now officially #15 on a waiting list, hoping for a call in November or thereabout. I haven’t started in on the seed catalogues yet, but I’ll get there I’m sure. 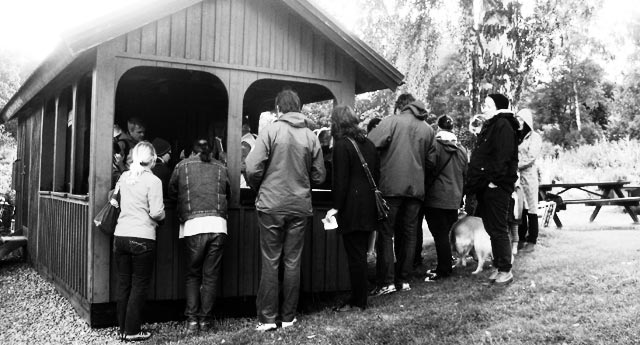 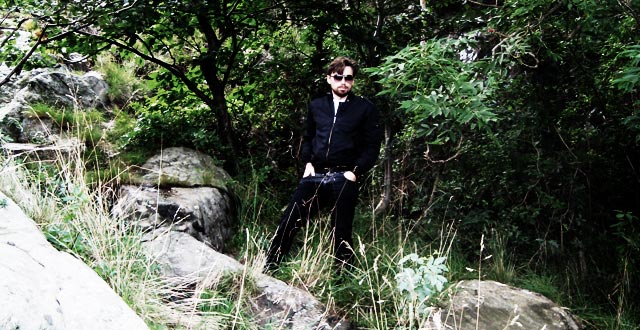 We saunter back down the hill – Olle would badly sprain his ankle on the same slope a few days later – and I go home to start a productive, although comatose, Saturday. There’s much more to say about the whole nesting thing, and should we get started with growing stuff I’m certain that I’ll be dumping all manner of ambitions here, but until then this post might serve as a reminder of how things get started – not with a great plan but for the hell of it, with a fuzzy idea based on nothing but a hunch.

It just struck me that I’m not the only one who is nourishing make-believe escapist ambitions among my acquaintances; is this an age thing? Is 31 the age at which you want to find meaning in life and feel the dirt beneath your fingernails and whatever? Maybe I just ought to compost myself on the plot and fertilise someone’s produce; I’m sure “corpse potatoes” would fetch a good price on eBay.

Post title from Depressing Comic Week over at Explosm. They’re already famous, but I bet you don’t read it.